While most personal finance sites have a “books to read” list, or do book reviews on the usual suspects (such as a couple of my favourites, Rich Dad, Poor Dad, and The Wealthy Barber) I would like to recommend something a little off of the beaten path today.  While Freakonomics and its sequel are pretty well known in a general sense (both are bestsellers), I haven’t seen them discussed very often on personal finance sites around the blogosphere.  The thinking and statistical proof that these books put forward is not just helpful information, but I feel like the lens I view the world through has been widened due to these books.

The central premise to the two books is quite simple.  It is the idea that human beings respond to incentives in weird and wacky ways that we often don’t realize until we see hard data to prove it.  From this premise, authors Steven Levitt (a Chicago economics professor) and Stephen J. Dubner (a writer for the New York Times), show how when we view situations through unemotional, logical analysis, the conclusions we draw can be very striking indeed.  The two champion the idea of looking at large-scale human actions from an economist’s framework of interpreting data.  I guarantee the results will shock you.

Wal-Mart and Street Gangs Have What In Common? 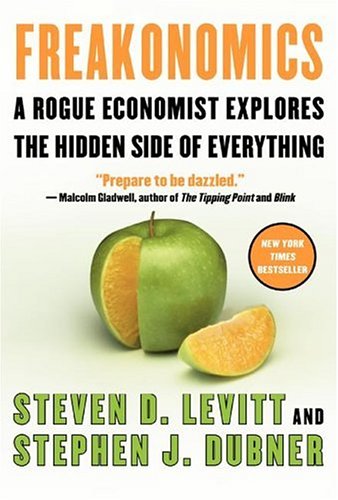 Levitt and Dubner conclusively show that no matter how independent, smart, affectionate, unique and altruistic we might consider ourselves, the truth is that the vast majority of us will respond to incentives in exactly the same manner.  They compare the rates of cheating between sumo wrestlers and teachers, and conclude they are similar when they are both offered financial performance incentives.  They show how supply and demand fundamentals can be creatively applied to the oldest profession – prostitution.  The most intriguing case study for me, was the data they will able to interpret about gangs.  The authors were able to get their hands on the extensive work of a psychology masters student who was doing his thesis on the inner finances and connections within drug gangs.  He was initially drawn to the project by his observation that drug culture seemed to infer that all drug dealers were rich and lived a luxury lifestyle, yet the vast majority of people you see dealing on the corners live with their moms.  I don’t want to give away too much, but I’ll tease you with the idea that Levitt and Dubner end up comparing the structure of a street gang with the corporate organization of Wal-Mart.

How Can These Books Help You?

Now you might be wondering what this has to do with personal finance.  Some of it admittedly is just a fun read, but the real value comes from the idea of logically assessing situations instead of just trusting in clichés and “common sense,” that limit those all around you.  Once you realize that concepts that would be considered radically “outside the box” are really just the application of logic to irrational situations, it frees up your mind to explore creative to solutions to many areas of your life.  You also begin to see motivations for what they really are, and while this can often times be disconcerting (just wait until you read what these guys have to say about the idea of charity), I find a sense of freedom in it.

Learn To Save Money By Cutting Through Myths

In addition to this revelation, there are some specific chapters that look at situations that will almost certainly affect how you approach certain financial moves in your life.  The most prevalent one is the study on how much value a realtor actually has.  This is actually so conclusive that I will probably do a separate post on it one day, suffice to say that the vast majority of the time you are better off selling the house on your own as opposed to using a realtor.  That one tip alone will probably save me several thousand dollars in a lifetime.  The other direct link I found was in Superfreakonomics where they talk about why investors almost always buy at the top and sell near the bottom, despite the knowledge that this is exactly the wrong way to go.  The main reason behind this is the idea that as humans we are built to feel pain from loss more than pleasure from gain (and actually we are just like primates in this regard).  Just wait until you read about how they prove this by getting monkeys to use money.  Simply incredible.  Get ready for some of the beliefs you would have defended an hour before to be completely turned on their head as Dubner and Levitt present you with the data and leave you shaking your head in disbelief.

Have any of our readers read these books?  I think I’ll probably re-read them every couple years or so to keep me on my toes.

I read Freakonomics earlier this year and it was a fun read. I can’t make it through boring books so I need to find ones that keeps it fun. I’ll check out the wealthy barber from the library and see what the fuzz is all about. :)

As someone who already has an obvious grasp of financial issues you might find TWB a little “elementary” but I think it is perfect for initial forays into the personal finance realm.