Paying Off Your Student Loans With an MS in Information Security

It’s no secret that IT professionals enjoy great job prospects and earn plenty of money. But did you know that there’s an IT field where professionals can earn an average of $39,000 more a year than the average for IT professionals? And what if qualified specialists in this comparatively lucrative IT field were in especially high demand?

That field is cybersecurity, and you can get into it by earning a Master of Science in Information Security. Employers around the nation need information security professionals to protect their sensitive data from hackers. There’s already a severe shortage of experts in the field of information security, and that shortage is expected to get worse as demand for cybersecurity professionals increases by an expected 37 percent by 2022. Earning an MSIS now can help you get in on the ground floor and make a lucrative and fulfilling career for yourself as an information security specialist.

Demand for Cybersecurity Specialists Is Growing

Why? Well, it’s no secret that the need for qualified information security specialists is dire. The FBI reported 300,000 cyber crimes in 2013 alone, causing financial losses of more than $525 million. More than 17 financial institutions and major retailers fell prey to cybercrime in 2013. 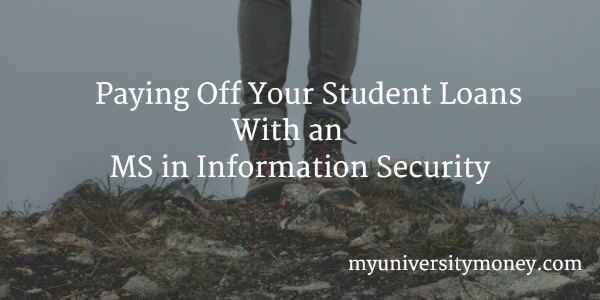 It’s not just big retailers and banks that need to worry about cybercrime. Any company or institution with sensitive information to protect can be a victim. Even individuals succumb to cybercrimes, including bank fraud and identity theft. As the economy recovers from the effects of the Great Recession, the technology sector has added the most jobs, and of those jobs, 38 percent are cybersecurity positions.

Cybersecurity Professionals Command the Highest Salaries in IT

Related: Turning Your Social Media Skills into a Career

If you love computers and technology, you should consider going into cybersecurity. Professionals surveyed by Semper Secure identified some of the following non-monetary perks of working in this field:

As you can see, a career in cybersecurity is more than just the opportunity to earn a six-figure salary.

Jobs Are Available Around the Country

No matter where you want to live in the U.S., you should be able to find a job in cybersecurity there. You’ll find the most jobs in California, especially in the San Francisco area, as well as New York and Washington, D.C. However, you’ll also find plenty of cybersecurity jobs in cities like Dallas, Chicago, Salt Lake City, San Antonio, Austin, Raleigh, Boston, New Orleans, Richmond, Atlanta, and even Nashville.

If you’re in the market for a career that will help you pay off your student loans in a hurry, you can’t go wrong with a career in information security. Cybersecurity work will help you translate your love of technology into a career that’s far more lucrative than the average IT field. You’ll be in high demand as a professional, and you should be able to find a good job pretty much anywhere in the country. Employers of all kinds, from financial institutions to retailers to government agencies, need smart, qualified cybersecurity professionals like you, so do your part and look into MSIS programs today.