Us personal finance nerds seem to have an ongoing debate raging (ok, maybe a slightly aggressive term) concerning who is cooler, the guys/gals that save more, or the guys/gals that earn more.  Clearly the coolest peeps are the ones that save as much as possible and instead of wasting valuable time partaking in a fairly mundane exchange of stale views, earn more than the rest of us as well.  But the show must go on, and I feel compelled to add my voice to that eternal argument between savers and investors/earners.

Let’s Hear It For The Savers

Personally, I like a good deal, I try not to spend more than I have too, and I like to think I’m pretty far from the “Western Norm” in terms of a consumer-driven outlook.  That being said, I am far more motivated by earning and growing my income than I am by saving.  A lot of that probably comes from the fact that earning is just sexier.  I mean really, there is no limit to how far you can push that envelope right?  In theory, there is no ceiling on your earning potential, but there is only so much fat to cut (albeit, for most of us, that is quite a sizeable chunk!).  Now, the couponers and extreme savers crowd out there will validly point out that saving is actually a more efficient process than earning in a lot of ways.  The most obvious being that every dollar of spending that you save, is really $1.40 in earnings when you consider that it is an after tax dollar that you have saved, as opposed to Uncle Sam’s money that you’re earning.  I have made progress in the savings department (as evidenced by my recent Sirius/XM adventure), and I have realized that putting into energy into cutting some of the “spending fat” is well worth it.  That being said, when it comes to this debate, I’m all about earning more.

But The Dark Side Is Always So Much Cooler 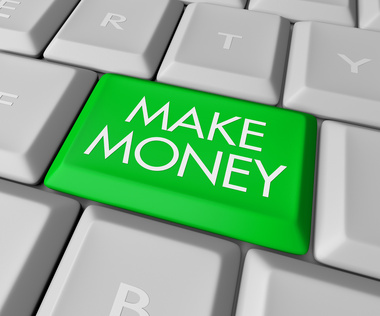 What it ultimately comes down to for me is what really gets me excited, and the answer to that is simply earning more.  Sure I can maximize my income through cutting costs, but that is something I force myself to do, earning more is something I want to strive for instinctually.  The dream that really gets me up early in the morning, or reaching for that cup of coffee to squeeze out an extra hour of productivity at night is to create enough streams of passive income that I can achieve full financial independence.  This doesn’t mean early retirement (although that would definitely be one aspect of “The Dream”), but it does mean being able to take a 6 month break to read all day and train for a marathon.  It means being able to visit friends and family at the drop of a hat.  Life is too short to live it “in the rat race,” as many PF bloggers like to say.  In order to create these passive income streams as quickly as possible it takes more than saving an extra $20 every month (although there is no doubt this helps), it takes some hard work and focus in whatever project(s) I choose to take on.

“Winning Isn’t Everything, But Wanting To Is” – Vince Lombardi

Perhaps even more than the reality that earning more is essential to achieving “The Dream,” I am attracted to earning more just for the sheer challenge of it.  While savers might argue that there is a unique challenge is making sure your money stretches as far as it can, it just doesn’t stoke my competitive fires.  I like the idea of building my skill set and keeping my eyes open for opportunities.  There is no doubt that I consciously and unconsciously compare myself to those around me in terms of being able to compete in an open market for a medium of exchange (I should definitely point out that I feel no need to compete in spending that medium of exchange – that is a fool’s game – as the savers will quickly point out).  There are a huge variety of ways to create more income for yourself and I like having all those options and exploring new challenges.  I love my “day job” as a teacher, and the stability it provides is a nice bonus, but I crave the raw adrenaline of pushing for a new idea or service and trying to make it realize its new potential.  Luckily I’m fortunate enough to be able to balance those two things in my life right now.

While I’m sure the debate will cease to be decided unanimously, I will likely always be more entertained and inspired by the “earners” as opposed to the “savers.”  Sorry “make your own coffee” crowd (I actually do make my own coffee, I just love to poke fun at the most common personal finance article known to mankind), we love you guys, but there are the cool kids, and then there are the really cool kids (or in the case of personal finance bloggers, there are the really nerdy kids, and the slightly less nerdy kids) and guess which category you’re in?

I like to think that I sit in both groups. I started out more towards a saver until I got my hands on something that generates a decent side income. Still, you have to restrict your spending if your extra income is going to mean anything. I hate to over-simplify, but both is better. :)

I hear you! When I graduated from university, I took a job that paid $25,000 a year. I loved my work – but I needed to increase my income. 10 years later, I had nearly quadrupled my annual income.

I’m really happy with my current salary, but that’s not stopping me from looking for freelance work. Besides, extra income will help pay off my student loans and consumer debt.

I don’t think there’s a binary division between “earners” and “savers” either. To get ahead, I think you need to do both!

This is a great topic. I think I fall somewhere in between the two (though I am not sure I am a PF nerd ;-) ). For almost 2 decades I worked for a non-profit where earning more was simply not very possible (there were 5 year longevity increases, but no opportunity for raises or promotions or side-hustles). I think that is what made me cost conscious (and having been raised by parents who were children of the Great Depression). But if earning more is only seen as a chance to spend more, that doesn’t improve the long term look,… Read more »

I tend to agree that earning more is much more fun, but you can earn millions and spend more than you earn while ending up in the poor house. Everybody’s favorite slogan “Spend less than you earn” still applies. However, with a higher income, cutting out certain expenses becomes much much easier!

It’s like a yin-yang – each side requires a bit of the other. If you’re saving at the beginning of your career, it’s easier to continue the habit when you do eventually earn more money. You’ve got to do both – even the top earners need to draw down their wealth at some point…

I try to do both as well. I think some of it comes down to time, and how much you value downtime. The way I see it is, yo can give up your downtime to work more, to afford a few more luxuries, or you can give up your extra luxuries in order to afford your down time.

I have always believed that we should aim to extend our cloth, rather than try to squeeze in a tight coat. This has got me in trouble on a few ‘frugality’ fora. I also don’t quite agree that reducing expenditure is easier than increasing earning: it is more immediate but is very limited and limiting.

Most of all, I remember my Greek philosophy – happiness is achievable via moderation in all things (Sorates).

0
Jen @ Master the Art of Saving

Right now, I guess I’m more of a saver. Hopefully when I come up with a way to earn money, I’ll become an earning junkie. :-)

Moderation in all things – except early retirement baby, I’m taking that one to the extreme!

Or use your extra work to become a capitalist and leverage your current time and production to produce a LOT more leisure time down the road.

Nice, Yin and Yang… You are like yoga master of PF, there PK.

Come on, doesn’t everyone love the title of PF nerd? I like your point about earning more vs investing more. See, I look at investing as part of earning more so I guess that’s why I come down so heavily in the EARN MORE camp!

Nice income growth. I can only hope I see the same sort of compounding!

I am along these lines as well. I do sit in both groups however to me time is money. Life is short and we don’t want to waste it. A balance between the two is the best scenario.

0
Juan
Reply to  Earn Save Live

I’m graduating from university soon and I definitely hope that I can do something similar. Those student loan bills are going to be due pretty soon!.

Don’t rush to pay them back in this low interest environment! Free money until at least 2014.