Hedge Fund Managers Would Be Great at Fantasy Football

I realized some time ago that for a guy who was never particularly good at math, I am semi-obsessive about statistical analysis.  When I was a kid I loved memorizing sports stats of all kinds.  If I would have read Michael Lewis’ “Moneyball” or Freakonomics as a youngster, I think I would have become more obsessed with the truth behind statistics to an even larger extent.  Many people with my mindset will naturally gravitate to the field of finance, where certain statistical ratios and percentages are often analyzed repeatedly in order to determine the companies with the brightest prospects relative to what they cost to own.  My family never talked about money, and so I was never exposed to rates of return, price-to-earnings ratios, or dividend yields.  I did however, play and watch a lot of sports as a kid.  As I got older I naturally gravitated to the new American pastime of fantasy football (I grew up right on the Canadian-American border, so I have a touch of each culture in me).  I was able to succeed at a disproportional rate because of my focus on the numbers.  As I have gradually soaked up information about the stock market over the last few years (mostly from books and blogs, and I’ll occasionally watch Jim Cramer for laughs), I have thought on many occasions that the parallels between fantasy football and evaluating stocks are eerie.

My Name Is Teacher Man and I Am An Addict… 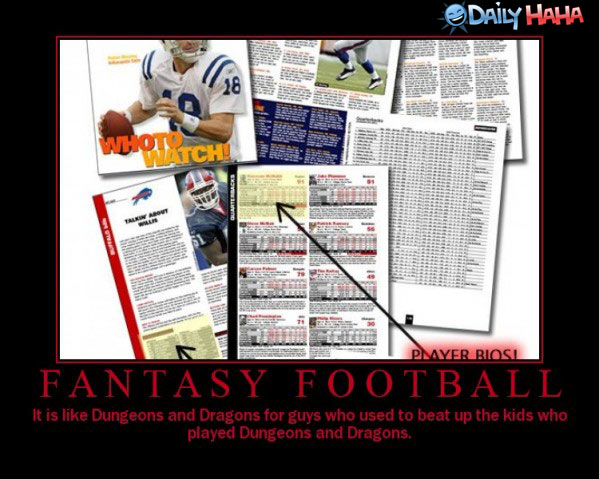 I became a partial owner of a fantasy football team when I was in grade ten.  A family member needed someone to go partners with him and he knew I liked football (sorry Canadians, I don’t mind the CFL, but my true love lies south of the border), so we co-owned the team “Crazy Canucks.”  I was immediately attracted to the idea of “owning” my own sports team.  I was always that geek as a kid that actually played the “career mode” or “franchise mode” on sports video games and simulated the seasons because I had more fun playing GM than pretending to be a virtual Michael Jordan.  I read about players’ tendencies and prospects voraciously, but when it came time to actually make decisions, my partner often decided that his views were the right ones and that his experience (not to mention my young age) justified this decision-making process.  Needless to say, I got my own team the next year.  I immediately noticed that people were often irrational in making decisions regarding their teams.  For example, if they really like a certain team, they would take that team’s QB high in the draft simply because the team had done well last year.  Players who played on bad teams were disproportionately penalized for this circumstance.  Owners would often ignore the fact that fantasy football is a game of pure statistics.  It doesn’t matter how good a leader someone is, or if the team is a good bet to win the super bowl, the only thing that matters is the probability that a player will achieve certain statistical milestones in any given season.

For those of you that aren’t familiar with fantasy football, the basic premise is that wannabes and “arm chair quarterbacks” can now prove how much they “know” about football by running their own “team” for an NFL season.  There are now thousands of different league setups, but the main idea is that each week players in the NFL will record a certain number of stats.  They will have a certain number of yards in rushing, receiving, and passing, as well as scoring a specific number of touchdowns.  These statistics are then given arbitrary point totals (for example a running back might get a point for every 10 yards of rushing).  The owners in the fantasy football league have each chosen certain players, and depending on how each of their players does statistically, they may win or lose on any given week.  It is as geeky as it sounds, and it is a lot fun.  I am not going to be falsely modest here, I am definitely a fantasy football addict, and I am very very good at the game.  I also maintain that I could take anyone who applies basic statistical analysis to the stock market (not that technical analysis voodoo) and make them a great fantasy football player without them actually knowing anything about football!  This is because many fans don’t realize that fantasy football has very little to do with which players people think are “good” and much more to do with which players are statically superior.

There are a number of things that factor into my evaluation of a fantasy football player.  Most people will base the majority of their focus on past performance, but as the stock market teaches us, “Past performance does not guarantee future results.”  I try to factor in such things as injury risk, changes in player personnel (does a wide receiver have a new quarterback), is the team looking to change strategy that year, how does a player’s specific strengths translate into my team’s scoring format, a player’s statistical probability of increasing or decreasing production based on age, and finally, there is an element of gut feeling involved that comes from wasting 10 hours every Sunday during football season.  If I get real fancy I will even look into player’s schedules to see the strength of their opponents for the season, what sort of stadium/climate they play in, and if they are in a contract year, as these variables can all make subtle differences in a player’s statistical production.

The Draft – Whose Stock Is Up or Down, and Who Is Undervalued?

At the beginning of each fantasy football season, the year will start with a draft where everyone divides up the players from around the league by picking them.  At this point players and stocks are exactly the same.  If my pick comes up and there are still several good running backs on the board, I am likely to decide that there is not enough value in drafting a running back at that time.  I’m not sure if I’m the first person to apply Warren Buffet’s stock picking criteria to fantasy football, but I’m fairly certain it isn’t exactly widespread.  Over the years I have come to the conclusion that succeeding to the maximum extent at a draft is all about exploiting the fact that the fantasy football market is about as efficient as the stock market.  In the long term, both markets will probably be fairly efficient, but there are still plenty of inefficiencies that allow “value” stock pickers like Warren Buffett, and value fantasy football owners to succeed a disproportionate amount of the time (*note: notice I did not say every time).  I even find myself acting like a hedge fund manger at fantasy football drafts trying to boost the reputation of players I have no intention of drafting, and vice versa for players I really like.  It’s fairly straight forward to exaggerate someone’s injury problems, or subtly question if a new QB will have a large impact on a teammate.  This will cause market inefficiency as owners will act on their emotions instead of on logic.  This allows me to grab players, or trade for players whose stock has went down for reasons I feel are not very valid, and get them at a good “value” because their “fundamentals” are still very strong.  That terminology should sound pretty familiar to anyone involved with evaluating companies and stocks

I could go on for another 3000 words or so about how the two activities have so much in common (I spend way too much time thinking about this stuff), and I have even considered writing a book on it at some point.  Does anyone else out there want to admit to a fantasy football addiction?  Am I imagining these connections, or do I make sense to anyone else out there?

We just completed our annual fantasy draft. We get to keep 3 players from last year (only 1 per position though) and the rest of the players go back in the draft. You have to truly be able to find the diamonds in the rough when you basically start your draft in round 4 every year. I was lucky enough to snag Aaron Rodgers a few years ago when he was first starting and he’s been my keeper ever since. Definitely connections to personal finance and understanding value. I have gotten into fantasy football even more over the last few… Read more »

Do you think there is any chance we could get a fantasy league going for Personal Finance Bloggers over Yahoo?! The winner could make a trophy badge for their site. It would be hilarious. One thing I have never done and would love to do is an “auction-style” draft where you get a salary cap and actually bid for players. It really is more skill than the standard format. Please shout out on the comments or in a PM if you would like to be part of the first-ever PF bloggers fantasy football league!

I’d like to be part of a PF fantasy football league but we’d have to get it going soon.

Yah, I’ve been mentioning it on various sites. I think I have about four people now. Even if we only got it started for week two it might be fun for bragging rights etc. As usual, as the guy that set it up I would be almost assuredly cursed of getting last place! P.S. anyone out there that likes Fantasy Football, check out the show, “The League” that runs on FX, probably the funniest, most underrated TV show on the tube today.

Nice analogy, I like it! Fun post as well. I don’t participate in any fantasy pools, but I do play a straight-up pool with some buddies at work. I find that tough enough every week, picking the winners.

Who are you picking to win it all this year? Green Bay still looks solid.

0
Author
Teacher Man
Reply to  My Own Advisor

Green Bay looks great returning so many players from injury on a team that already won the super bowl. The Eagles could be absolutely scary with the off season they had and the talent they have assembled. The truth is that with a league that promote parity as much as the NFL there are at least 6, maybe as many as 10 teams with a shot at the super bowl if things break right. As for my pick, if I’m going with the odds like I always do, I prefer to go with coaching, and a proven QB; therefore, Belicheck,… Read more »