Change Your Major if the Old One is Boring You

Do you ever think about dropping out of school? Sometimes that happens because you’re bored. And when you are, it’s usually time for a few tweaks. One of those tweaks is changing your major. A lot of the reason why you’re bored probably has something to do with the fact that you’re not really happy with your major. Fortunately, that’s a change that’s usually easy to make.

Your Boredom Is Ttrying To Tell You Something

Boredom is often an emotional reaction to an unsatisfactory environment. It’s not that there isn’t anything to do, and it’s certainly not brought about by physical factors. You’re bored because you’re not intellectually or emotionally engaged in your coursework.

That can happen very easily when your major is in a field of study that you’re really not interested in. Deep inside you start to feel down about what it is you’re doing, and your mind gradually begins to detach. Before you know it, you’re struggling to find ways to keep yourself involved in what it is you’re doing.

Related: Converting Your English Major Into a Career

Boredom is an emotional state that should never be ignored. It’s like “that little voice” inside of you that’s telling you that something isn’t right. And when you get that feeling, it’s time for a few changes – like your major. 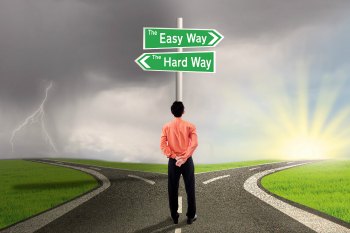 Part of the reason that you’re bored with your major might have something to do with the fact that you didn’t exactly choose your course of study. That’s not as crazy as it sounds. A lot of students are in majors that they have nothing more than a slight interest in, and that’s where the disconnect begins to appear.

A major is often chosen for reasons that have little to do with the person you are inside, and is often decided as a result of:

None of these sources are at all unusual as the reason why any student decides on a certain major. If any of these are the reason why you chose the major that you did, you should invest some time thinking about what it is that you really want to do, especially given the fact that you are now at university and have a better understanding of what’s going on and what you’re really all about.

If it’s possible to say, there’s more involved with a major then we often think. If you’re bored with your course of study, you’re probably also finding that both your motivation and energy levels are running extremely low. But this is the inevitable result any time that you’re doing something that doesn’t match who and what you are at the deepest levels.

Related:  Is Money the Main Reason You Chose the Major You Did?

By changing your major you could find yourself recommitting to your studies, and getting greater enjoyment of your entire university experience. The changing of your major should not only help to more closely align your studies with your true desires, but should also create a new challenge that will make school more exciting than it’s been so far.

Changing Your Major Is A Lot Easier Than Changing Careers

Changing your major isn’t just a university specific event. It’s a change that will have implications well past graduation. You’re not just changing your major, you’re changing the course of your life – and that will one day be a lot more important than you can imagine right now.

Related: Why Your Major Needs to Match Your Passion

If you don’t particularly like your major, it’s unlikely that you’ll ever get much enjoyment out of the career that it will produce. Unfortunately, changing careers is a lot more complicated than changing majors. Sometimes it means you have to go back to school, and it almost always means that you’ll take a cut in pay.

Even if you are a junior or senior, the most that will happen from changing your major is that you might remain on in school an extra semester or two (though even that’s not always necessary). But that will be far easier than the painful changes you will have to make once you’re out in the work world, and have obligations that are dependent upon your income.

If You Even Think You May Need To Make A Change – Do It Now!

There are too many compelling reasons to change your major if you are bored. And if you are going to make the change, do it now.

Yes, change can be a hassle. You may have to take certain new courses, and even extend your time in school. But that change will bring about all of the benefits we’ve discussed above – more contentment with your studies, a greater commitment to your education, and the prospect of a more satisfying career after graduation.

All of those are worth pursuing, and pursuing now. If you’re going to make the change, do it as soon as possible and things will go better with you going forward.